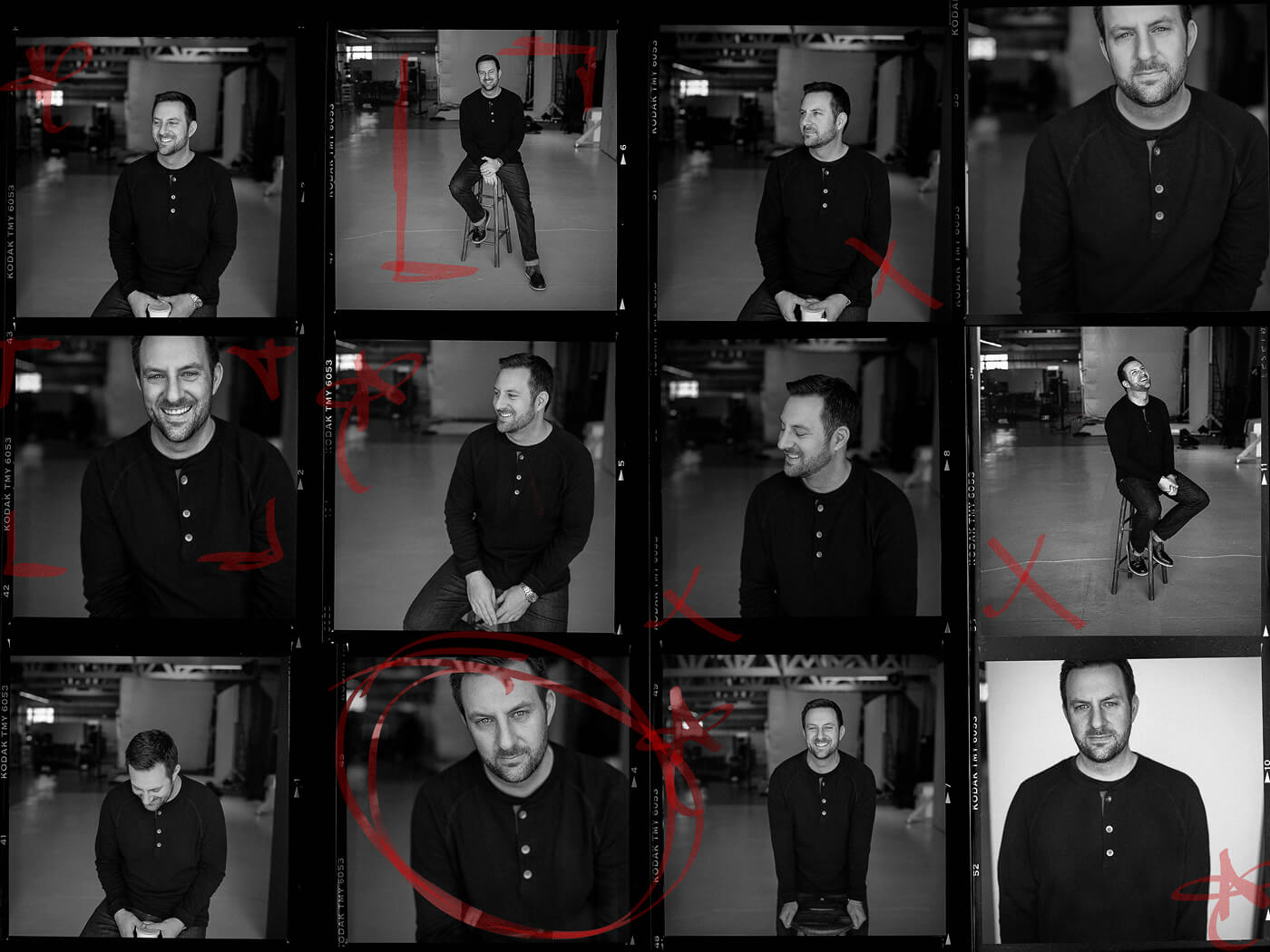 So Justin, tell us about your background and training―and who influences you?

“I definitely have more of a portrait, fine arts style of photography. As far as influencers, Richard Avedon, Irving Penn—you know, all the greats. I had a professor at school named Eliot that taught me to look outside of the frame to see what you’re actually photographing, versus what you’re not. That advice introduced me to new ways of bringing out the actual person in the photograph instead of just capturing a pretty face.”

What brought you to Stitch Fix?

“I was doing freelance work in southern California, where I’m from, when I saw a job posting for a company in San Francisco. I was at a point where it was just like, ‘You’ve gotta take a leap at some point—you might as well try.’ Three days later, I was on a plane up here to have an interview. Geez, a couple weeks after that, I was moving up here. It’s been quite the rollercoaster since then. Life changing.

I’ve only had two actual passions in life. One of them was golf, the other was photography. So I golfed for a long time and at some point when that career ended, the natural progression of my career would be to get into photography. Golfers are obsessive over equipment, like photographers.”

How mean is your golf swing, man?

“I’ve been playing since I was four. I collect Scotty Cameron Putters―all of them are customized [with my name]. I have three course records. And I still carry at a +2 handicap, which is pretty good. No holes-in-one though, but I have hit dozens of flag sticks.”

Nice! So what are a few tips to take a really amazing photo with a phone camera?

“First of all, just have fun! By having fun in general, you will just take a better photo.

The brighter, the better. Get something with good light; the sun’s out, it’s not super dark, I think always leads to better quality photos.

I wish I could honestly say that the photos I post on my Instagram are taken on my iPhone, but they’re not. I’m that guy, by the way—totally that guy, I’ll take it with my camera.”

What’s the story behind the photo above?

“I love the idea of a contact sheet, since film is something that I personally love. I have an old Hasselblad that I love to shoot, so I figured what better way to get a range of expressions of someone who isn’t all that comfortable in front of the camera.”

What are common mistakes beginners make when taking photos?

“I don’t see mistakes in photography because each person has their own unique reason for taking that photo. Like, is there really such a thing as a bad photo? I don’t think so. I think there are technical errors from a professional side. You may be like ‘Hmm, this is how you can do that better.’ But I wouldn’t necessarily say it’s a mistake.

There’s a professor at our school named Ralph Clevenger. The very first thing he told us was he’s ‘always shocked by the amount of people who walk out to the beach, or to wherever you can see the sun set, and they take a picture of the sunset―instead of turning around and seeing how beautiful the light is on everybody that’s looking at the sunset.’”

So tell us: why do you love your job at Stitch Fix?

“I realized it the first time my mom got a Fix—I knew we were doing something innovative, pushing the boundaries of retail, and everything about the company was new and exciting. But when my mom got her first Fix, she called me sobbing, crying—a total mess. I answered the phone and it was like ‘Gosh, what happened?’ In between the muddled crying, she was telling me that she had just got her first Stitch Fix box, and she said she loved every single thing in the box. She said it was the first time that somebody actually took the time to listen to what she needed.

It was really a different mindset, like, ‘Wow, we really do affect people. This is important.’ That’s what made me love Stitch Fix personally. My mom’s still a client to this day, still cries when she gets her Fixes. Not as often, but she does cry every once in awhile.”

What are some of the coolest images you’ve shot?

“They all stand out because there’s always a story behind each photo, so I can personally go back and remember that exact day, that exact time. Like what broke on set that day, when we were shooting, etc.”

There’s a lot of days I come to work not 100% sure what environment I’m gonna be in so I dress like ‘I just need to make it through the day, man. That’s it.’  And sometimes, that’s me sitting down on the sidewalks in San Francisco, or laying on my stomach in the street or the studio.”

What are your thoughts on photo filters―do they hurt the craft?

“Anything that keeps people taking pictures and enjoying the craft doesn’t bug me at all. I think it’s user preference for the most part. I guess what I don’t like is filters that desaturate or muddy-up the photo. I like to be able to see what people photograph, so I think with some of the filters, I’m kinda like ‘Ahhh, I wonder what it looked like before they put that filter on it,’ just from my own curiosity. But I don’t think it ruins anything. I think it makes it fun for people.”

For someone looking to upgrade to a real camera, what’s a good one for starters?

“Stick with something that’s easy to use. I would say pick a budget and find a beginner DSLR within that range and go out and have fun—take lots of photos. See what you like and what you don’t like. There’s a lot of people who say the camera is just the tool and the photo is made from the person behind it.”

What are the key things you look for in nailing a great shot?

“I look to catch the moment in-between the two moments you’re looking for. So for me, when taking a portrait, there’s always the person who shows up and there’s the person who’s being photographed―and they’re two very different people. We always refer to it as the in-between moment. When you capture it, you know you have it instantly. Sometimes it might be awkward, sometimes it might be not as polished as it should be. For me, the goal is to capture that actual, genuine person.”