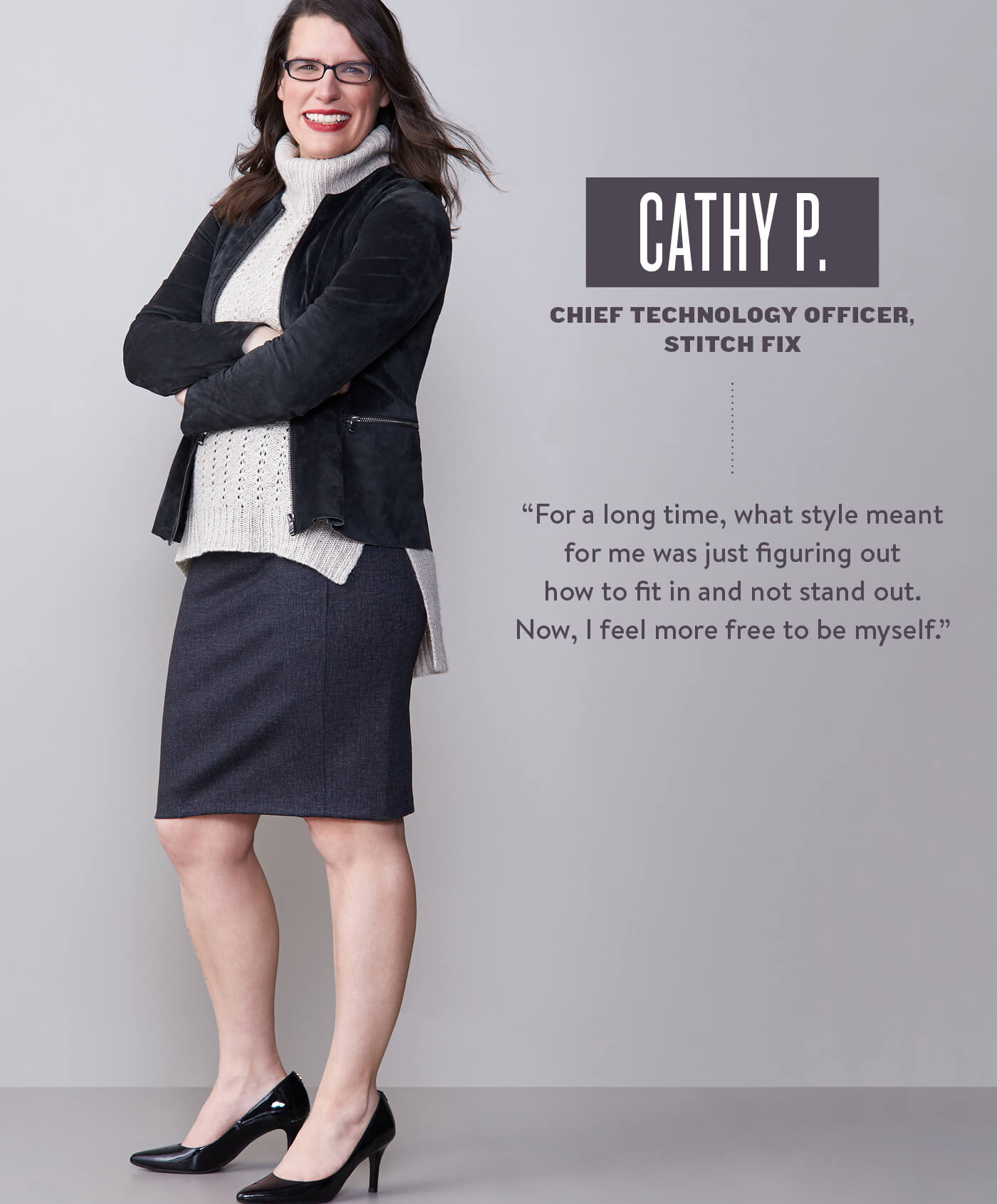 Cathy Polinsky, Chief of Technology at Stitch Fix
On women in technology and the stable marriage problem (it’s not what you think!)

We chose you as a woman who redefines the rules.
“Haha, well, I’m not a rule breaker.”

We disagree! Tell us about your background and how you’ve made your own rules—in fashion and in life!
“I grew up Pittsburgh and became interested in computers at an early age. I studied computer science and graduated during the dot-com boom. I started working at Amazon at a crazy time—it was a lot of fun. I was actually an awkward, rule-following teenager and I feel like in order to be a rule breaker you have to know the rules. Socially, I didn’t really know the rules.”

Can you elaborate?
“Part of me was trying to fit in, you know? That’s kind of a theme for me. When I was in the tech industry I was one of a few women. I was the only woman on a lot of the teams and I was trying not to stand out because of my looks. I wanted to be respected for what I was doing and not how I looked.”

For a long time, what style meant for me was just figuring out how to fit in and not stand out. Now, I feel more free to be myself.

How did you do that working in tech?
“I tried to play down what I was wearing to be one of the guys. It really wasn’t until I became more successful that I felt like I could focus on style and wear dresses to work. I’ve heard from other women engineers that this isn’t uncommon.They may dress down or not wear makeup because they want people to see them first as an engineer and it’s only further up in their career when they’re in an executive meeting or in front of customers where they dress up and own their style as a woman. My style now is mainly about ease and convenience but I also want to look good.”

How did you become interested in programming?
“I’ve always liked solving problems—doing puzzles and games—and computer programming has always seemed like you’re solving problems. My elementary school got a grant from Apple for a computer lab, so I learned Logo programming and Basic programming there. When I went to high school there were no classes. So, I did a summer program at Carnegie Mellon called Andrew’s Leap and had an amazing time. The morning was filled with algorithms and the afternoon was hands-on exercises with robotics and programming. I learned so much! After that summer, I knew that’s what I wanted to study.”

What would encourage more women and girls to come into tech?
“I grew up in a time where there were all these stereotypes from geeky 80s flicks and I think that really influenced how people perceived tech. The more we can do to break that mold, the more women and underrepresented groups will see technology as an industry for everyone. I’m working with more women here at Stitch Fix than in my entire career—it’s refreshing and exciting.The more diversity we bring to technology teams, the better people will feel about who they are.”

I was trying to act like one of the guys instead of being who I was and being comfortable in my own skin was a challenge.

What drew you to Stitch Fix?
“It’s a business model that makes sense to me as someone who doesn’t identify as a style maven. Having a personal stylist who can help me put myself together and who does know the rules? Amazing! Also, I don’t have the time to go shopping. I have two kids, so I do all my shopping online.”

Do you have a personal hero or someone you look up to and why?
“Definitely my husband, Russell. He and I have a strong, equal relationship—including how we parent our kids. He’s also in the tech industry, and although he’s founding a company right now, he’s been really focused on our kids and family as I’m starting this new job.
Oh! I’m surprised that I didn’t think of this first, but my biggest rule breaking moment in my life was proposing to my husband!”

Really?! Tell us more.
“Well it’s actually a geeky story at heart. When I was a teenager, I learned about an algorithmic problem called the stable marriage problem. It’s a problem used to create matches and is used to match medical school students with residency programs—however, it’s taught by thinking about matching up men and women in marriages. The problem is that algorithm is biased towards the individuals doing the proposing – the person doing the proposing gets their best possible match, whereas the one waiting for proposals doesn’t. This lesson always stuck with me so that when my then-boyfriend and I were getting serious, I decided I wanted to be the one to propose. I organized an elaborate scavenger hunt in Seattle to all the places meaningful in our relationship and it ended with a question and a ring. Russell said yes and he wears both his engagement ring and his wedding ring every day.”

Style Advice In Your Inbox

Have a fashion question? Our expert Stylists are here to help.